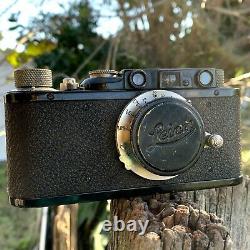 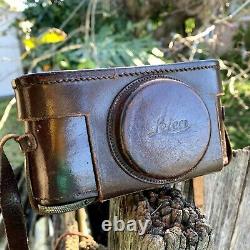 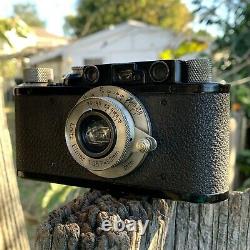 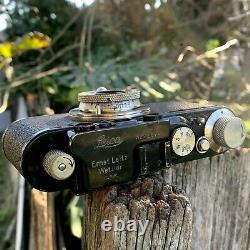 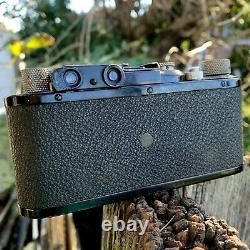 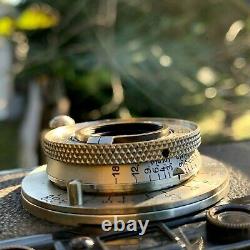 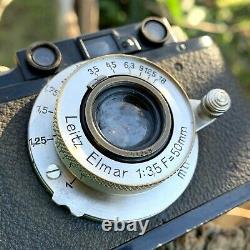 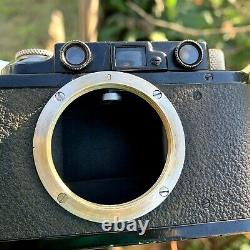 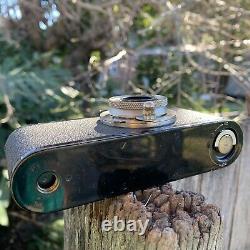 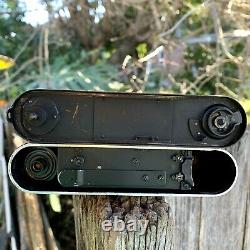 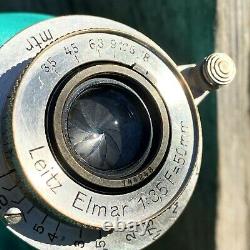 What I would call a semi-professional refurbishment/clean.. Camera Body in great condition with no dings but minimal wear as shown which reveals a gold/brass metal underneath most notably on the bottom and lens caps with a few surface scratches near the rear viewfinders but apart from that and potentially other minor marks shown, the black chrome body is shiny and bright (I personally think the brass adds appeal).

Leatherette is in top shape. Case in more than decent condition with minimal wear genuine leather of course LEICA II CASE FLAT NOSE. Shutter release is snappy all knobs, buttons, latches, dials and switches perform as expected with no stickiness or excessive sensitivity pretty much bang on. Shutter bay clean as shown as well as spool bay on the bottom. No lettering/number discoloration still nice bright and gloss grey indentations. Film counter functions as normal as does all on the camera. Mount is Leica Screw M39 classic mount.

Lens overall very clean minimal exterior marks and scuffs as shown, such as in between the grips where dirt and grime particularly loves to built up but most of the exterior is clean which I also show. Lens clear not mint but great I would say first glance, because this lens is not professionally serviced please be aware of perhaps microscopic or minimal debris and dust inside the lens which. I have done my best to illustrate that, I try to be so in depth as to avoid cases or issues down the track. Lens dials and zoom turn as expected with no unnecessary resistance and no excessive movement.

As shown on the last pic their is considerable oil on the blades that may need servicing but can be used as is also. Happy to do flashlight test to show, I don't know if it would pass though as Ken Rockwell says: The front element is made of glass as soft as chalk, and most have been damaged by careless cleaning over the years.

It is very unusual to find one that passes with flying colours. Would personally rate lens 8/10.

Takes 0 batteries and is a rangefinder model. Tested in all aspects and performs like it should in every way. Pretty neat and solid bundle/kit consisting of 4 separate items. VIEW All PICTURES AS THIS MAKES UP A LARGE QUANTITY OF THE CONDITION AND REQUEST MORE FOR CLARIFICATION. IMPORTANT: I want to eliminate all chances of an unhappy customer/case down the track so please be aware everything is laid out for you to scrutinise and I would love to send any more pictures or even a video if you request. 1x Leitz Elmar f3.5 50mm Collapsible Prime Portrait Lens 662125 Ernst Leitz GmbH Wetzlar. 1x Leica Genuine Metal Cap.

1x Genuine Leica Brown Leather Case with Straps. Introduced in 1932, is the first. This was such a desirable feature that some owners of. At first the cameras were finished in black enamel with nickel fittings.

The following year they were available in chrome, the first Leicas to be made with a chrome finish. Black model IIs account for about 2/3rds of the total production. In 1933 offered the advantage of slow shutter speeds the model II continued in volume production until 1939 with a few made later. It could also be factory converted to.

Serial number range 71,200 to 358,650. Leitz first made the world's first interchangeable-lens 35mm camera in 1930, and this was the first interchangeable lens provided with it. In 1932 the lens mounts were standardized so that all lenses were interchangeable among all LEICAs. Standardized lenses are marked with a small "o" engraved on the rotating barrel near the focus lever. The LEICA ELMAR 50/3.5 Nickel was so good that it allowed 35mm cameras to make big prints as sharp as the popular 8 x 10 cameras of the era.

This is the lens that was so good that it established 35mm as the world's most popular format, a format which both lives today and which spawned the 24 x 36mm "full-frame" digital format. While a Summicron of any vintage might be sharper in the laboratory, this tiny screw-mount ELMAR weighs half as much and collapses almost completely into the camera body, so if traveling light, this is a great 50mm lens, and it's completely devoid of distortion.

A LEICA and this lens fit into a sock and then into luggage as a spare camera. All Items will arrive exactly as you see in the photos, please make sure you have done your research and observed all the pictures and request more if you need to, or ask any questions if you are unsure about anything regarding this listing. If any complication arises, please message my store. Have a great a week. The item "STUNNING LEICA II 2 CAMERA LEITZ CHROME BRASS ELMAR 50MM LENS F3.5 & CASE EXC+" is in sale since Monday, October 18, 2021.

This item is in the category "Cameras\Film Photography\Film Cameras". The seller is "perfect_pixels" and is located in Merrylands. This item can be shipped worldwide.